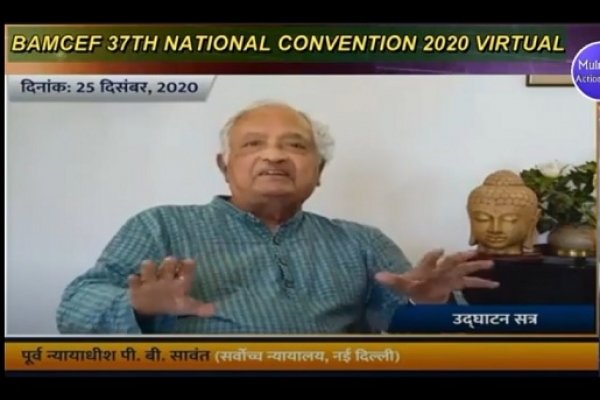 Justice P.B. Sawant passed away at the age of 91.

Former Supreme Court Justice P.B. Sawant passed away at his residence in Pune after a short illness on February 15, at the age of 91.

According to sources, the retired judge, who has been working in public affairs since retiring from the Supreme Court in 1995, has been ill for a month. His last rites will be performed on February 16, according to sources close to him.

Justice Sawant was in the news years ago for being one of the chief editors, as well as retired Bombay High Court judge B. Kolse-Patil, the original and controversial 'Elgaar Parishad' held in December 2017.

Speaking to DailyGraph News , Justice Kolse-Patil, a close friend of Justice Sawant, said the Supreme Court Judge was a remarkable man and a great commitment to social justice was prestigious.

[Justice Sawant was an example of how one should behave toward another. In his long career, his court decisions were intended not only to ensure political and social justice for the victims but also economic justice. His social skills were inexhaustible, and he remained active and tireless until the very end. His strong sense of justice and ethical conduct was inspiring and exemplary for all of us, ”said Judge Kolse-Patil, praising the late judge.

Justice Sawant began serving in the Bombay High Court in 1973 and was appointed to the Supreme Court in 1989 before retiring in 1995.

The court report included testimony from the late Baratiya Janata Party (BJP) Minister from Gujarat Haren Pandya, who testified at a meeting allegedly convened by the then Prime Minister Narendra Modi on the evening of the burning of Godhra train in February 2002, in August 2002. 50.

According to this report and the testimony of Mr. Pandya, officials at the meeting were reportedly instructed not to restrain the anger of powerful Hindutva activists following the train burning incident.

In 2003, Judge Sawant chaired a commission set up to investigate allegations of corruption against four ministers in the then-Congress-Nationalist Congress Party (NCP) government in Maharashtra. A report released in February 2005 sued NCP leaders Nawab Malik, Padamsinh Patil and Jargaon, Suresh Jain but acquitted Vijaykumar Gavit. It led to the dismissal of Mr. Jain and Mr. Malik (currently Minister of Youth Development in the Maha Vikas government led by Uddhav Thackeray).

On December 31, 2017, more than 250 public outfits in progress - including several left-wing groups and Ambedkarites across Maharashtra - and people such as Gujarat white Jignesh Mevani, Baripa Bahujan Mahasangha principal Prakash Ambedkar, Jawaharlal Khalid student leader at the 'Elgaar Parishad' held at Shanawar Wada of Pune and organized by Justice Sawant and Justice Kolse-Patil.

Following the Bima-Koregaon riots that began the next day (January 1, 2018), Pune city police, in their controversial investigation, claimed that 'Elgaar Parishad' was responsible for the Bima-Koregaon conflict - a view strongly opposed by several other activists including Justice Sawant and Justice Kolse-Pat .

Since then, the matter has been investigated twice. When Pune rural police set up a MOTO against right-wing Hindutva leaders Sambhaji Bhide 'Guruji' and Milind Ekbote, calling them founders of violence, Pune police and Central organizations such as the NIA campaigned across the country and arrested several prominent lawyers, writers, academics and activists. and lawyer Surendra Gadling, professor Shoma Sen, Gautam Navlakha, poet P. Varavara Rao, Father Stan Swamy and Sudha Bharadwaj, for alleged links to illicit Maoist clothing and their roles in the 2017 "Elgaar Parishad" and the subsequent confrontation between Bima-Koregaon.

Judge Sawant, who ruled that Parishad was organized to fight the civil forces, insisted that the arrests were "a way for the government to end the conflict".