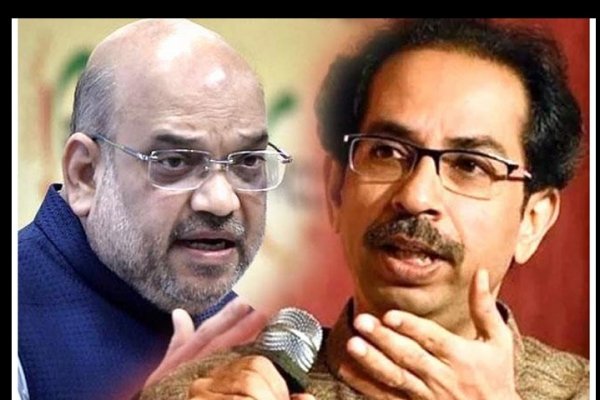 We did not give any assurance to Shiv Sena behind closed doors: Amit Shah

After the assembly elections, Shiv Sena broke the alliance with BJP and formed an alliance with Congress and NCP. Shiv Sena had claimed that BJP had promised to give 50-50 seats in the distribution of power including the post of Chief Minister. The BJP leader and the Union Home Minister broke their silence today on the promise of the closed door meeting. Stating that no promise has been made, Amit Shah slammed Shiv Sena and allies in the Mahavikas Aghadi said We did not give any assurance to Shiv Sena behind closed doors

Narayan Rane's Lifetime Medical College was inaugurated by Union Home Minister Amit Shah. At this time, Shah took the news of the allegation made by Shiv Sena. "Elections were held in Maharashtra when I was the BJP president. We had contested the elections under the leadership of Devendra Fadnavis. But then a three wheeler government came into existence in Maharashtra. The three wheels move in different directions. This government has failed on every front. I have come today to tell the people of Maharashtra. The government was formed here in defiance of the mandate you had given. The mandate was for a BJP-Shiv Sena government led by Modiji and Devendraji. Who are saying that we broke the promise. I would like to remind them that we are a people who keep our word. We do not lie like that. In Bihar, we fought elections. We had promised that if the NDA government came, Nitish Kumar would be the Chief Minister. Even though we got more seats, we made Nitish Kumar the Chief Minister, ”Amit Shah replied to Shiv Sena.

Speaking further, Amit Shah said, "It is said that I made a promise in a room. I don’t do it in some room. He does what he does in front of everyone. Do it on Danke's injury. I have never done politics behind closed doors. I am a man who lives in public. No one is afraid. Speaks in front of everyone. I made no such promise. Assuming that he had promised, Uddhavji was campaigning to use a photo of Narendra Modi which is two and a half times bigger than you. Asked for votes in the name of Modiji. I had a meeting. A meeting was held with Modi. Everywhere we talk, elect an NDA government. Fadnavisji will be the Chief Minister. Why didn't you speak at that time? But no such promise was made.

In the temptation of power, he left the principles of Balasaheb Thackeray in the river and came to power. Section 370 deleted, scared says we welcome. It was decided to build a Ram temple. Even then, I will not go. What happened We were never scared. BJP has come into politics for ideology. Does not formulate theory for politics. I want to tell Shiv Sena friends that you have not come for principles. Balasaheb went. Theories are now being debunked for politics. But the people of Maharashtra know better. All I want to say is, we will not walk your streets. If we had followed your path when Devendra Fadnavis was the Chief Minister, your party would not have survived, ”said Amit Shah, targeting Shiv Sena.