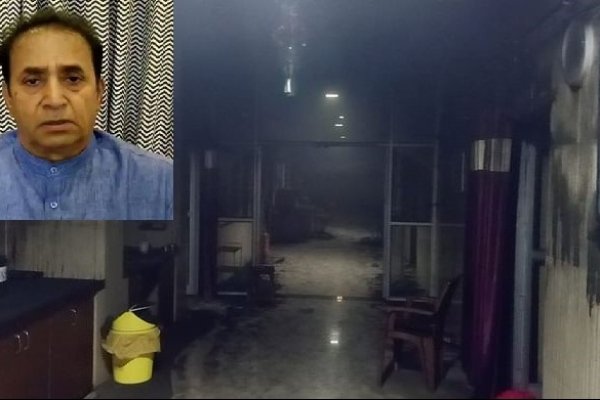 Saturday morning was unfortunate for Maharashtra. When everyone was asleep in the middle of the night A fire broke out at the district hospital in Bhandara around midnight due to a short circuit in the child care unit. Ten children died in the blaze. The incident took place around 2 pm.

A fire broke out in the intensive care unit of the district general hospital in Bhandara due to a short circuit. The incident happened suddenly on Saturday night. A nurse at the hospital noticed smoke coming out of the burn unit. When the nurse opened the door, there was a lot of smoke everywhere. The nurse immediately informed the hospital authorities. Then the rush started everywhere.

Upon receiving the information, the fire brigade rushed to the hospital. The rescue operation was launched with the help of the citizens of the hospital. The intensive care unit has two units, outburst and inbourne. Seven of the children on the monitor were rescued. 10 newborn babies from the outburst unit died unfortunate.

After this unfortunate incident, there was an uproar outside the hospital. The families of the deceased children broke the humbarda. There is a lot of hustle and bustle in the hospital area. Meanwhile, after getting information about the incident, District Collector Sandeep Kadam, Superintendent of Police Vasant Jadhav, Additional Superintendent of Police Aniket Bharti, District Surgeon Dr. Pramod Khandate approached the hospital and inspected the spot. A meeting of senior officials has also been held in this regard.

At the same time, the Home Minister of Maharashtra has also left for the spot. The Home Minister left for Nagpur from where he would go to Bhandara. On reaching Bhandara, he will visit the Government Hospital and talk to the Superintendent of Police and take preliminary report of the incident. After the death of 10 newborns in the Bhandara accident, the government has now come into action mode.

Deputy CM Ajit Pawar has given instructions for safety audit in every hospital's infant ward. On the other hand, about the accident, Bhandara District Magistrate Sandeep Kadam said that at around 2 pm there was a fire in which 10 newborns died. He said that we were successful in saving the lives of 7 infants.