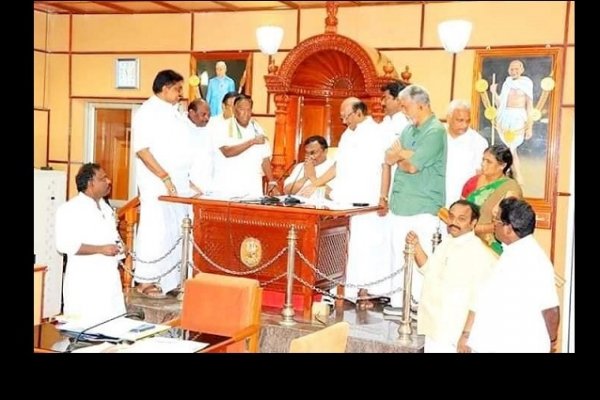 In Pondicherry Legislative Assembly , the Congress has suffered a major blow and the government has collapsed. V Narayanasamy's government was in trouble in pondicherry on Sunday after two more MLAs from the ruling Congress-led alliance resigned. This forced the government to prove a majority on Monday. This time the government failed to prove a majority. Meanwhile, V Narayanasamy has criticized what is going on in Puducherry as political prostitution. Congress MP Rahul Gandhi had recently visited Puducherry. He also attended an event this time.

With the resignation of one Congress and one DMK MLA each, the strength of the ruling Congress alliance in the 33-member assembly had shrunk to 11. The Opposition has 14 members and seven seats are vacant. It was time for Narayanasamy's government to prove its majority. But the Congress government has collapsed as it failed to secure a majority in the confidence motion.

The Narayanasamy government was defeated by 11 to 11 votes. A one-day special session was called to present a majority resolution. As soon as the convention started, Narayanasamy had proposed for a majority. But soon after, the ruling MLAs along with him resigned. After this, the President declared that the Congress government was in the minority. Meanwhile, according to PTI, Chief Minister Narayanasamy has met the Governor and tendered his resignation.

“What is going on in pondicherry is political prostitution . But the truth will win, ”Narayanasamy had said before proving a majority. Narayanasamy has accused the BJP of trying to impose Hindi language. "We use two languages ​​in Tamil Nadu and Puducherry, but the BJP is forcibly imposing Hindi," he said.

Kiran Bedi removed from the post of Deputy Governor

A few days ago, pondicherry Deputy Governor Kiran Bedi was removed from office. It is understood that the decision to remove Bedi was taken in the wake of an ongoing feud between Bedi and Chief Minister Narayanasamy. ANI has given the news in this regard. President Ramnath Kovind has replaced Bedi with Telangana Governor Tamilsai Sundararajan, who has been given the additional charge of Deputy Governor of Puducherry.