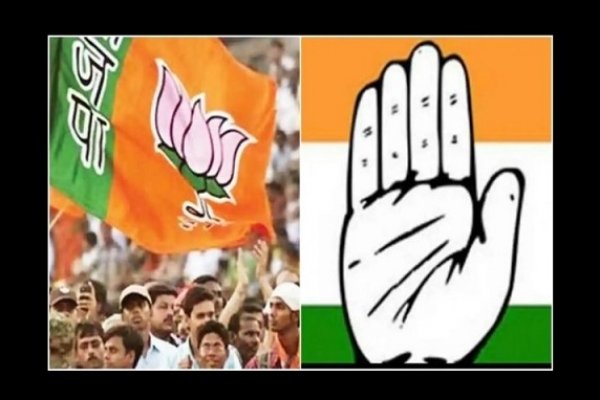 The impact of the Farmers Protest in the civic elections of Punjab, BJP is being strongly opposed

Chandigarh: BJP's opposition to the body elections to be held on February 14 in Punjab is becoming all-round. The BJP had alleged that the nominations of more than 500 of its candidates had been canceled. On the other hand, farmers' organizations are protesting against BJP candidates in various places across Punjab and closing their election offices every day. While BJP candidates are being boycotted in the body elections to be held in Punjab, farmers are also besieging senior BJP leaders in Punjab. In many places, Kisan Union workers are reaching out and boycotting them. BJP leaders are being boycotted in various places in Punjab.
The BJP talked of opening its offices across Punjab, including Hoshiarpur, for the body elections, but the farmers started protesting. Although the police had made very strong arrangements, but in spite of that a large number of farmers arrived and the farmers spoke of closing the open office for the BJP body elections.

The siege of the BJP office was announced on behalf of the farmers of Hoshiarpur under the leadership of Azad Kisan Committee Doaba due to the protest of the Bharatiya Janata Party on behalf of the Hoshiarpur Kisan Jatha Bandis. As a result, a group of peasant prisoners in Hoshiarpur were furious and a strategy was devised to surround the BJP office, but this strategy remained in vain when the BJP closed its own office and left.

The BJP continues to oppose the repeal of farming laws across Punjab by farmers' organizations. In Ferozepur, on behalf of BJP president Ashwani Sharma, a meeting was being held with the workers at City Plaza Palace regarding the city council elections when a large number of farmers arrived. The BJP was strongly opposed.

On the other hand, a heavy police force was also deployed on this occasion and as soon as the police expelled Punjab Pradhan BJP Ashwani Sharma, the farmers started protesting. Some people also attacked the vehicle of Punjab President Ashwani Sharma with sticks and surrounded several BJP leaders and staged a protest. While defending, the police kept fleeing from the spot. Such situations are appearing in most parts of Punjab. BJP candidates are being opposed here and there and in many places the election office has been closed.

After the attack, BJP leaders blocked the National Highway and protested. The same BJP president Ashwani Sharma said that if this is to be done then why the Punjab government is holding elections. Meanwhile, Kisan Union leader Harnek Singh Mehma said that there has been a long struggle. The central government is not repealing the farming law. Today the Punjab-led BJP has been opposed but peacefully. The attack on BJP chief Ashwini Sharma has been carried out by mischievous elements which is reprehensible.

When the same SPHGS Cheema was spoken to, he said that Ashwini Sharma has left here. Speaking on the same attack we had made solid arrangements, the SP said that there was no attack. Punjab BJP president Ashwini Sharma said that the body elections in Punjab are not going to be fair. He directly accused the Congress that the Congress government does not want to hold fair elections in Punjab.

At the same time, he alleged that the way in which the BJP leaders and workers are protesting in Punjab is not by the farmers' organizations but by the people of the Congress who are opposing the BJP. At the same time, he said that the motive behind not taking the security provided by the Punjab government was that the government was not able to provide security where the BJP's programs were taking place.

Congress president Sunil Jakhar said that in a democracy, everyone has the right to speak and those who are opposing BJP leaders should not do so. This is discrediting Punjab. The BJP has the right to campaign in elections.