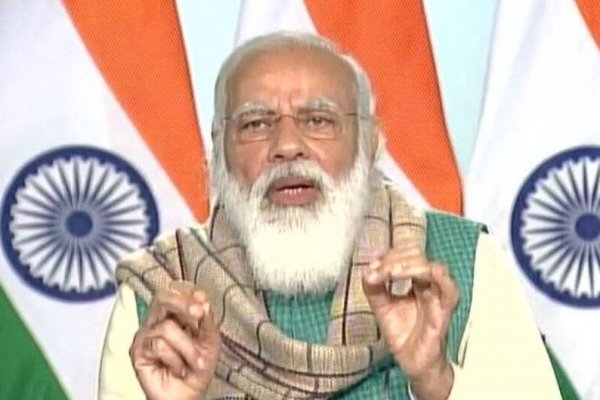 Delhi : Farmers in Delhi are protesting against the agricultural laws brought by the central government. The agitation has intensified within the previous couple of days and there are signs of repercussions within the Parliament session also
Modi had avoided commenting even after the violence in Delhi. However, within the all-party meeting held before the last convention, Prime Minister Narendra Modi remained silent about the farmer's movement. Parliament's budget session began on Friday. However, the opposition had boycotted the President's address, criticizing the government's stance on the farmer's movement. then, an all-party meeting was held today under the chairmanship of Prime Minister Modi. during this meeting, the Prime Minister presented the role of the government on agricultural laws

The Prime Minister said, I would really like to reiterate the purpose made by Narendra Singh Taumar. the ultimate settlement between the farmers and therefore the government might not are reached, but the govt is putting options before the farmers. Farmers should discuss this. He has told the farmers that they're just one call faraway from the farmers, ”Modi said. "The government is prepared to debate all issues. All topics are going to be discussed. All parties are going to be given a chance to present their case. The proposal made by Agriculture Minister Narendra Singh Taumar to the farmers remains valid. the govt is prepared to debate with the farmers. Tell your supporters about it. the answer should come from the discussion itself. We all need to believe the country, ”Modi appealed in an all-party meeting. Congress leader Ghulam Nabi Azad, Trinamool Congress leader Sudip Bandopadhyay, Shiv Sena MP Vinayak Raut and Shiromani Akali Dal leader Balwinder Singh Bhunder had raised the issue of farmers' agitation.