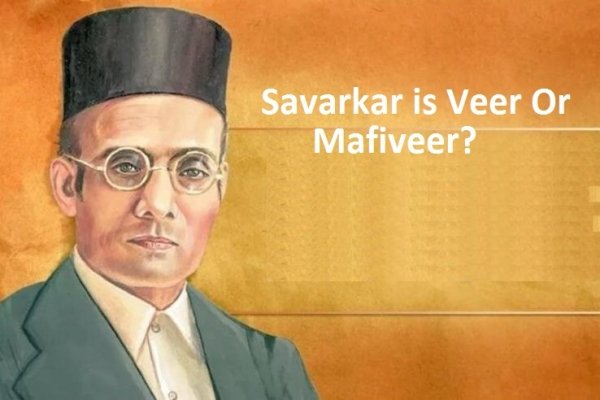 Savarkar apologized to the British many times , Why RSS called him Veer ?

How did Savarkar become ' Veer ' ? He apologized to the British many times thats why people called him Mafiveer he wrote in his apology to the British "If the government releases me in its infinite goodwill and kindness, I assure you that I will be the most ardent supporter of constitutionalist development and will be loyal to the British government "

savarkar is veer or Mafiveer ? Today (26 february ) is the death anniversary of Vinayak Damodar Savarkar, RSS called him Veer , who founded political 'Hindutva', different from Hinduism. In many important states of the Center and in the country, the ruling party BJP does politics of this ideology of Hindutva.

Recently in its national executive, BJP had also announced to make nationalism its most prominent agenda. Savarkar gave this idea to the BJP on the basis of the idea of ​​Hindutva which dreams of building India.

Today, from the speeches of BJP leaders to the posters of the party, Savarkar gets an important place. At a time when the party running on the agenda of militant Hindu nationalism is in power, it seems important to consider Hindutva and its founder V D Savarkar.

What were Savarkar's thoughts? What was his contribution in the freedom struggle? What was the role of Savarkar in the freedom movement, due to which he was awarded the title of Veer Savarkar, this question is very important.

In July 2013, during an interview with two Reuters news agency journalists, he described himself as a 'Hindu nationalist' while being the Chief Minister before becoming the Prime Minister.

Savarkar is the creator of that Hindutva which proved to be divisive between Hindus and Muslims. Like the two-nation theory of the Muslim League, their Hindutva also helped the British in the policy of 'divide and rule'.

Political scientist and professor Shamsul Islam writes, the term "Hindu nationalist" originated in a historical context during India's freedom struggle against British imperialism. This freedom struggle was mainly fought under the leadership of the Congress for an independent democratic secular India. The 'Muslim Nationalists' under the banner of Muslim League and the 'Hindu Nationalists' under the banner of 'Hindu Mahasabha' and 'RSS' opposed this freedom struggle saying that Hindu and Muslim are two separate nations. To thwart the freedom struggle, these Hindu and Muslim nationalists joined hands with their colonial masters so that they could acquire the religious state of their choice 'Hindusthan' or 'Hindu Rashtra' and Pakistan or Islamic nation. '

After this interview of Narendra Modi, Professor Shamsul Islam wrote an open letter to Narendra Modi, in which he writes, 'People are well aware of the role of Muslim League in dividing India and its politics but I think It is important to refresh your memory after the independence and how the 'Hindu nationalists' played a bad and devious role during the freedom struggle.'

According to that letter, 'Hindu nationalists' like the Muslim League believe in two-nation theory. The birth of Hindutva, both V D Savarkar and the RSS, have a clear understanding in the two-nation theory that Hindus and Muslims are two separate nations. The Muslim League under the leadership of Muhammad Ali Jinnah passed a resolution demanding a separate homeland for the Muslims of India in the form of Pakistan in 1940, but Savarkar did so much earlier, only in 1937, when he held the 19th session of the Hindu Mahasabha in Ahmedabad. I was making a presidential speech at that time when he declared that Hindus and Muslims are two separate nations.

In the said letter, Shamsul Islam quotes his thoughts from Savarkar's overall veneration, "Currently there are two rival nations living side by side in India. Many immature politicians make a serious mistake by believing that India has already turned into a harmony nation or will be transformed only by our will. Our kind-hearted friends on this type of raw-thinking friends only want to convert dreams into reality. Therefore, they get impatient with communal complications and blame communal organizations for this. But the concrete fact is that the so-called communal question is nothing but a result of cultural, religious and national rivalry between Hindus and Muslims for hundreds of years. We should face these unpleasant facts with courage. Today it cannot be assumed that India is a threaded nation in unity, on the contrary, there are mainly two nations in India, Hindu and Muslim. '

Savarkar is the original thinker of the Rashtriya Swayamsevak Sangh, who considers Hindu-Muslim as two different nations. Since then, in the following years also, the Sangh has remained dependent on the idea of ​​its Hindu nation and the idea of ​​Hindu nationalism.

In contrast, the Congress also curses the Congress, M K Gandhi, Nehru for the partition of India-Pakistan. In the current era, for Hindu nationalists, they are the biggest 'traitors' who are against communalism, who are going to follow the secular idea.