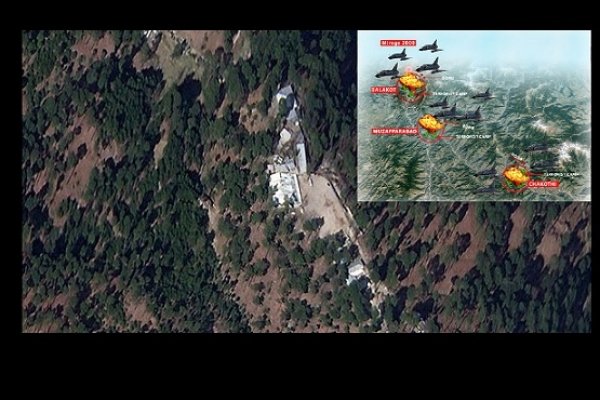 The Chief of Air force , On February 26, 2019, around 3.30 am, BS Dhanoa, called National Security Adviser Ajit Doval on a special RAX number and said, "The monkey is dead." The message was that the training camp of Jaish-e-Mohammed militants in Balakot was destroyed by Indian Air Force planes in a cross-border operation. Dhanoa had also called the defense minister. At that time, Nirmala Sitharaman had the Ministry of Defense.

Ajit Doval called Prime Minister Narendra Modi and informed him. This was the response of the Indian Army to the terrorist attack carried out by Jaish-e-Mohammed on 14 February 2019 at Pulwama. Forty Indian CRPF personnel were killed in the Pulwama terror attack. India had avenged the deaths of the martyred soldiers by carrying out air strikes.

Two years later, new information has emerged about India's operation. The name given for the operation as well as a missile with optical guidance failed this time.

According to the information given to Hindustan Times by some senior officials who were involved in the Balakot strike, the name Bandar was deliberately chosen for the operation. The port was chosen to confuse Pakistani intelligence that India was referring to Jaish-e-Mohammed's headquarters in Bhawalpur. Jaish-e-Mohammed leader Masood Azhar was hiding there.

Before the strike, a detachment of Indian troops had gathered in Rajasthan to mislead Pakistan. As a result, the Pakistan Air Force deployed all its fighter jets in Bhawalpur to intercept India. As a result, when the Indian Air Force dropped a 90-kg Spice 2000 bomb from a Mirage 2000 fighter jet, the Pakistani aircraft was 150 km away. The bomber struck shortly after 3:30 a.m. Indian time, officials said.

However, six bombs with optical guidance did not explode due to software glitches. In Balakot, only the mosque was not hit at all. Preparations for Namaz had started there.

However, national security planners were worried that the last missile would fail. Evidence of the strike would have been obtained through optical guidance, which could have been used by India if Pakistan or any of the Western countries had raised the issue of strike. Similarly, Pakistan had claimed that the strike had failed by spreading false propaganda and presenting photos of Pakistan-occupied Kashmir. Officials said the photo clearly showed that about 300 jihadists were present in Balakot before the strike.