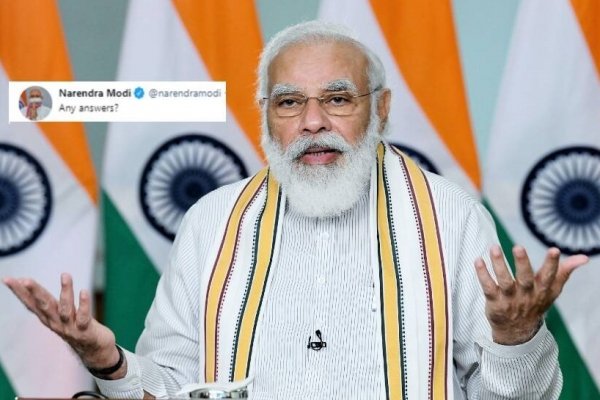 Prime Minister Narendra Modi on Thursday asked a question from his official Twitter handle. He has asked his followers to answer this question. In fact, Modi quoted a tweet and retweeted it, saying if there are any answers, tell me. In a tweet retweeted by Modi, he asked, " How many containers are on these trains? Please count and reply as comment" The West has a dedicated freight corridor (Western Dedicated Freight Corridor in India), "the original tweet said. Modi has shared this tweet and asked his fans for an answer in this regard. Modi's tweet received more than five thousand replies. Some have said how many containers there are, while others say the numbers are enough to boost the Indian economy. Some have thanked Modi for this corridor.

Modi on Thursday inaugurated the 306-km-long New Rewadiru to New Madarkhand stretch of the Western Railway dedicated to the nation. He also gave the green signal to the world's largest double stack long hall container train operations running between New Atelier and New Kishangarh. The tray is one and a half km long and transports containers one by one with double capacity. Railway Minister Piyush Goyal, Rajasthan Governor Kalraj Mishra and Haryana Governor Satyadeva Narayan Arya were also present on the occasion through video conferencing. Similarly, Rajasthan Chief Minister Ashok Gehlot and Haryana Chief Minister Manoharlal Khattar were also affected. Sharing a video of this special train on the same route, Modi asked to see how many containers are on the train.

During the inauguration of this route by the Prime Minister, the train will open up new opportunities for farmers, entrepreneurs and traders in the National Capital Region, Haryana and Rajasthan. The Dedicated Freight Corridor, whether east or west, is not just a modern freight corridor but a corridor built for the rapid development of the country, he said