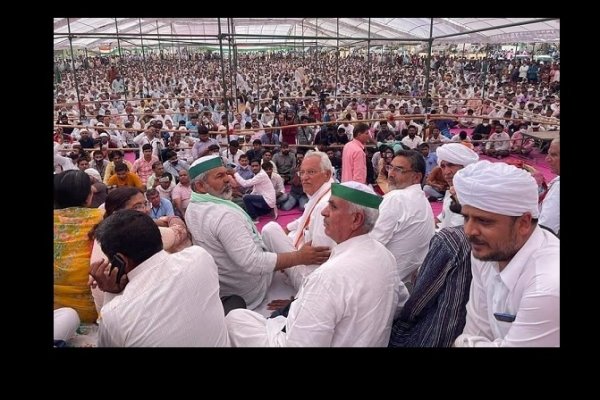 Agitating farmers, opposing agricultural laws, will wave black flags at their homes and offices to mark their displeasure against the government on the completion of 100 days of the Farmers Protest on 6 March. Along with this, Karnal will also make a 5-hour blockade on Manesar Palwal Highway (KMP). This decision has been taken at the joint Kisan Morcha meeting on March 2 on the Singhu border.

Farmers of several states, including Punjab, Haryana and western UP, Madhya Pradesh and Rajasthan have been demonstrating on the Delhi borders since 26 November 2020, demanding withdrawal of the three agricultural laws and guaranteeing the minimum support price. The Samyukta Kisan Morcha has announced a blockade on the KMP Expressway from 11 am to 4 pm on the completion of 100 days of dharna demonstrations at the Singhu Border, Ghazipur Border, Tikri and Shahjahanpur Border. During this time the toll plaza will also be free.

In a statement issued by farmer leader Dr. Darshan Pal said that apart from the blockade on KMP, black flags would be waved at homes and offices to support the movement across the country and to protest against the government. The protesters will also tie the black band.

Anti-privatization day will be observed on 15 March 2021 at the call of the Central Trade Unions. United Kisan Morcha has announced its support to the trade union. On Tuesday (March 2) meeting, it has also been decided that in order to punish the anti-farmer, anti-poor policies of the United Kisan Morcha Bharatiya Janata Party (BJP) in those states where elections are going to be held. Will appeal to Farmer leaders will visit the contested states during this period and take part in the programs.

The United Kisan Morcha will also launch a campaign for the Guarantee Act on the MSP, its second major demand. Under the "MSP Bachao Abhiyan", the reality of the price of farmers' crops in various markets will be shown, which will expose the false claims and promises of the Modi government and the MSP. The campaign will be launched in the southern Indian states of Karnataka, Andhra Pradesh and Telangana. Farmers from the rest of the states of the country will also be included in this campaign.