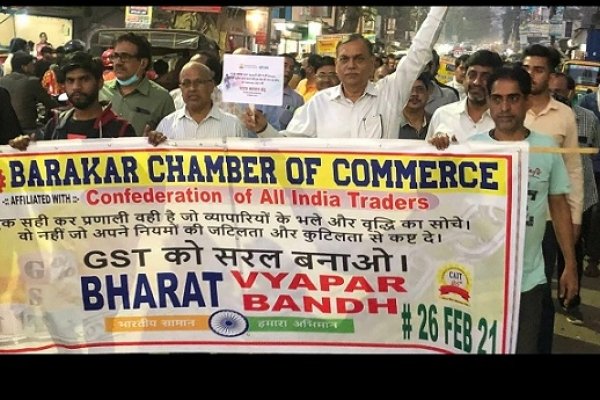 In Jharkhand, the impact of the Bharat Bandh called by the trade organization Confederation of All India Traders (CAIT-CAT) on February 26, ie, to demand a review of the Goods and Services Tax (GST) provisions, can also be seen. Apart from CAT, the Ranchi Goods Transport Association also supported the ban. Due to this, the supply of goods will stop in the entire state including Ranchi. Commercial markets will remain closed. Transport Association spokesman Sunil Singh Chauhan said that on Friday, the supply of about 500 truck-goods in Ranchi will be disrupted. It contains the items of necessity of Rosemarja.

Earlier yesterday, traders have been appealed for support to make Bharat Bandh a success. The businessman was also appealed to keep his establishments and shops closed. At the same time, the local transport association has also supported this ban. Association's patron Bindul Verma said that the current system of e-way bill is going to ruin the business, all transport businessmen will protest in solidarity. Explain that the organization is opposing GST as well as reducing the validity of the e-way bill.

These business organizations have supported the shutdown

Strategy made to make the movement effective

The impact of the movement will be seen in Ranchi along with the country. For this, a strategy was chalked out by various organizations on Thursday. Traders will keep their establishments closed due to demands. CAT has been told that there will be full support of traders in Bharat Bandh. Around eight crore traders across the country will keep their establishments closed. Businessmen say many of the provisions in GST are absurd and irrational. This irks businessmen unnecessarily.