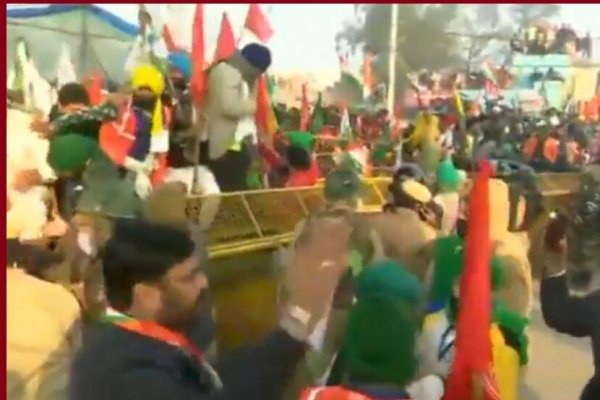 Farmers protesting against the new agricultural laws will enter the capital today and will stage a tractor march. The Delhi Police has allowed the march after the Supreme Court refused to mediate. A large police presence has been maintained on the Delhi border from law and order standpoint. Meanwhile, thousands of farmers marching towards Delhi have broken barricades installed by the police. Farmers are allowed to march on the tractor after the operation on rajpath.

The police have broken up barricades set up by the farmers on the Tikri border of Delhi-Haryana. It has been learnt that these farmers belong to kisan mazdoor sangh samiti in Punjab. The Joint Kisan Morcha has not started the march yet. Meanwhile, farmers leaders at the Tikari border have urged the agitators to maintain peace. He has informed that the time of agitation will be decided by holding a meeting with the police.

Though the Delhi Police has allowed the farmers' tractor march after five rounds of discussion, the police have put in place tight vigils on the road keeping in view the possibility of a strike. The farmers' tractor march will begin after the road way on rajpath is over for safety reasons. All the obstacles will be removed on the delhi border for this tractor march. Swaraj India leader Yogendra Yadav has informed that farmers who have protested on the delhi's bessley for the past two months will enter Delhi.

March on 1st February
Darshanpal, member of the J.K. Kisan Morcha and president of the Revolutionary Farmers' Union, said on Monday that farmers are agitating for the repeal of new agricultural laws and guaranteeing the minimum basic value of the law. Eleven rounds of discussion between the farmers' union and the Central Government have failed. The Budget session of Parliament begins on Friday, January 29 and the Budget will be presented on February 1.