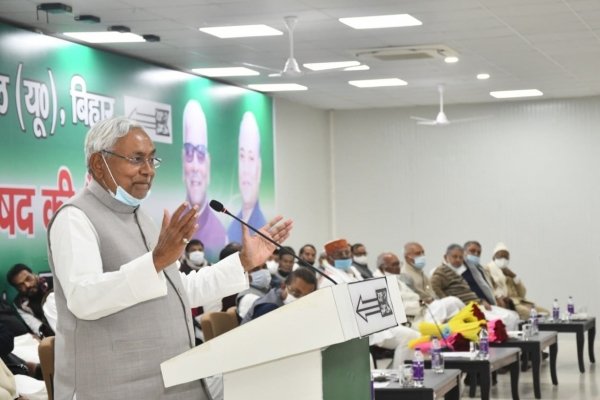 Nitish Kumar is currently in the role of Shiv Sena

Patna: Bihar Chief Minister and Janata Dal United leader Nitish Kumar attacked the BJP. During the election, it had been not known who was the friend and who was the enemy, said Nitish Kumar. Nitish Kumar has indirectly targeted the BJP for being a traitor. The two-day meeting of the JDU has begun.

In this meeting, Nitish Kumar's defeated candidates directly accused the BJP of betrayal. Therefore, in Bihar, Nitish Kumar is currently within the role of Shiv Sena. (Nitish Kumar said did not differentiate between friends and enemy, slams BJP) "The BJP played a special game within the elections. We pretended to be together ahead but played differently behind the scenes. It's like hitting the rear . Our defeat was thanks to the Allies, of course, to the BJP, ”said the defeated JDU candidate.

We were taking everyone along during the election. But at an equivalent time, the smoke of suspicion was coming. Nitish Kumar has now started expressing his displeasure against the BJP, saying that each one issues should are discussed within the NDA five months ago. Cabinet expansion moves are underway in Bihar. Despite being the most important party within the Assembly elections, the BJP gave the Chief Minister's post to Nitish Kumar. However, Nitish Kumar had rejected the post saying that he didn't want the post of Chief Minister. But at the urging of the BJP, Nitish Kumar became the Chief Minister. But now the rift between the 2 parties is coming to the fore.

In the 2020 Bihar Assembly elections, the BJP won 74 seats, the JDU 41 and Lalu's RJD 75 seats. Meanwhile, Nitish Kumar's defeated candidates also accused the BJP of fielding Chirag Paswan. We hoped for help, but he also accused the BJP of helping the opposition. Meanwhile, Bihar politics is in turmoil after this meeting. except for now, we are with the NDA, explained JDU Lok Sabha group leader Lalan Singh.