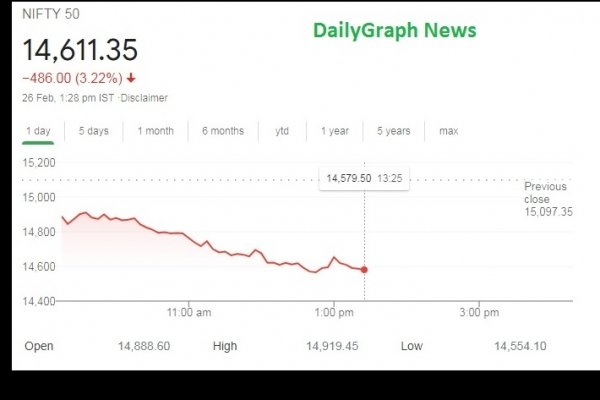 The Indian stock market started with a sharp fall on Friday, raising fears that it could turn into a black Friday. The stock market plunged more than a thousand points in the morning. The fall in global prices is said to be the cause of the fall. The Sensex was at 50,184.60 on the Bombay Stock Exchange when the stock market opened at 9:18 am. When the market closed yesterday, the Sensex was at 51,000. On the other hand, the wide-based National Stock Exchange index Nifty fell by 283.45 points to settle at 14.835.45. The Sensex was down 1.68 per cent and the Nifty was down 1.87 per cent. The Sensex had lost a thousand points in the morning session.

Today, the National Statistics Office will release data on India's GDP. As the GDP growth figures for the third quarter, from October to December 2020-21, will be released today, market volatility will also depend on it. The last two quarters have had a very negative impact on the growth of the economy. However, after the unlock, the GDP growth in the October-December quarter is expected to be better than the previous two quarters. Of course, the stock market is also said to be in a slump due to the impact of the global economy. All stock markets in Asia have seen declines in the first session. This is said to have caused huge losses to investors.

The Nasdaq on Wall Street in the US fell sharply on Thursday. Thursday saw the biggest one-day drop in the last four months at Nasdaq.