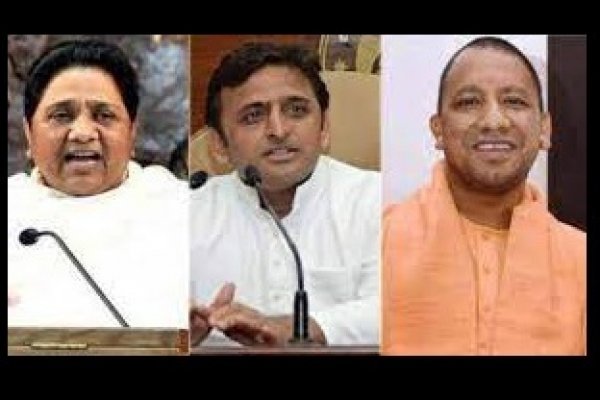 In the UP assembly elections held between February 10 and March 7 this year, BJP created a new record by winning 255 seats out of 403. Since then the party's strategists also started making claims of winning all the Lok Sabha seats of UP in 2024. It is said about the BJP that the election preparations never stop there, but after the massive victory in the last assembly elections, the BJP set the target of 100 percent victory in the Lok Sabha elections from UP, after that the speed of its preparation was made on seeing it. Is. Actually, BJP got 62 out of 80 seats in UP in the 2019 Lok Sabha elections. Its ally Apna Dal won 2 seats while BSP had to be content with 10 and SP 5 seats. Congress had got one seat while RLD did not get a single seat. This time BJP's claim and preparation is to make NDA win all 80 seats.

BJP has to become number one from number two on the seats it lost last time. Keeping this goal in mind, the party is churning UP on the pretext of civic elections. For this, programs are being set from now till 2024.

In fact, one of the reasons for the BJP's confidence is that for the first time after 1985, a government in UP has returned to power with an absolute majority after completing its five-year term. In UP, BJP has been winning every election continuously since 2014 (Lok Sabha in 2014 and 2019, Assembly elections in 2017). On the other hand, the main main opposition parties of the state Samajwadi Party and BSP are not able to come out of their own conflicts.
Talking about the Samajwadi Party, Akhilesh Yadav tried to revive the organization with programs like party membership campaign and Tiranga Yatra, but the defeat in Azamgarh and Rampur Lok Sabha by-elections, leaving the alliance of leaders like Omprakash Rajbhar and Keshav Dev Maurya and uncle Shivpal Singh seems to be struggling more with Yadav's harsh rhetoric.

Mayawati, who was reduced to just one seat in the assembly elections, is also making claims like rebuilding the party, forming an alliance with Muslims and Dalits, but most of her energy is spent in attacking Akhilesh Yadav and responding to his reactions. is visible. Apart from these, BJP has already started with full force in preparing for Mission 2024. On the one hand, Chief Minister Yogi Adityanath and both Deputy CM Keshav Prasad Maurya and Brajesh Pathak are constantly touring and creating an atmosphere, on the other hand, after Swatantra Dev Singh and Sunil Bansal, the state president Bhupendra Chaudhary and State General Secretary Organization, who are heading the UP BJP respectively. Dharampal Singh has also started a region-wise churning round from day one.
State President Bhupendra Chaudhary, after assuming office, has held a meeting of West Zone in Ghaziabad and then Kanpur and Kashi areas with his arrival in UP. At the same time, Dharampal Singh has also reached Gorakhpur to hold a meeting of Gauraksh area on Friday after meeting of Kashi area on Thursday after separate meetings of office bearers at Lucknow headquarters.

Mantra to top the civic and graduate elections
The BJP is considering the civic elections as an opportunity to once again test the organizational strength and instill enthusiasm among the workers ahead of the Lok Sabha elections to be held in 2024. Even for Bhupendra Choudhary and Dharampal Singh, the civic polls are the first big opportunity to prove their strategic prowess. Therefore, both the leaders are calling for 100% victory in the civic and graduate elections to the office bearers and workers by holding frequent meetings.

Recently, in the meeting of BJP's core committee, it was decided that out of the six regions, the meeting of two will be held by the state president and the organization general secretary of four. It started on Wednesday. The meeting of Goraksha Kshetra is taking place after Braj Kshetra, Paschim Kshetra and Kashi Kshetra. Dharampal Singh, who reached Kashi for the first time on Thursday, asked the party functionaries to start preparations from now on to achieve 100% target in civic and teacher elections. In Gorakhpur on Friday, his focus will be on the civic and graduate elections.
As per the expectation in the civic elections, the body convenors have been deployed to top the party. Soon, the body in-charge in every district and the in-charge of the bodies will also be posted. By the end of this month, all these office-bearers will go on migration to the allotted bodies. With the inclusion of the missing names in the revision of the voter list, the process of selection of candidates for the bodies in the party will also start.

Before the civic elections, another opportunity for the BJP to directly connect with the public is coming up in the form of Seva Pakhwada. BJP will celebrate Seva Pakhwada from September 17, the birthday of Prime Minister Narendra Modi, till Gandhi Jayanti i.e. October 2. Under this, programs will not only be held up to the booth level, but there will also be competition for service works.