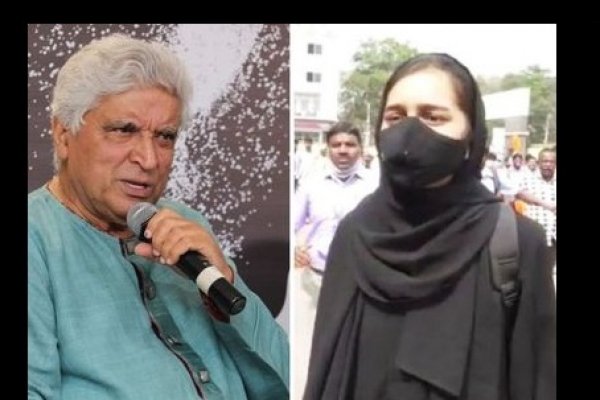 Javed Akhtar tweeted and said, 'I have never been in favor of hijab and burqa and stand by the same thing even today. But I have only hatred in my mind for these mob of goons who are trying to intimidate a small group of girls. Do they consider this to be manhood, it is very shameful.

These Muslim girls are agitating after the hijab was banned in colleges in Karnataka. She is protesting by taking to the streets and she says that wearing hijab is according to her religion. Recently a video of PSE College in Mandya district of the state went viral.

In this video a girl comes to school wearing hijab on scooty. As the girl parks the scooty, a large number of students donning saffron pots and holding flags start shouting 'Jai Shri Ram'. In response to this, the student also raises slogans of 'Allah Hu Akbar'.

On the other hand, no decision has been taken in the High Court even today on the controversy surrounding the wearing of hijab of girl students in Karnataka's schools and colleges. The court adjourned the hearing of the matter till Monday. Along with this, the court has made important remarks that students cannot insist on religious dress from schools and colleges. Chief Justice Ritu Raj Awasthi said that schools and colleges should be opened immediately and education is necessary.