Lawyers of girl students said - there is no talk of restriction in any law HC's blow to those demanding hijab, Chief Justice said - students cannot insist on religious dress
Thursday, 10 Feb 2022 00:00 am 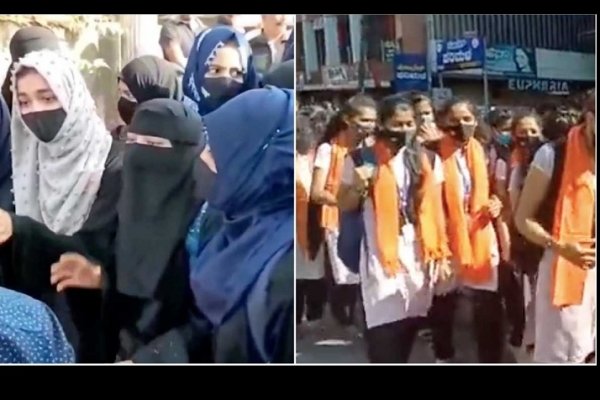 Even today, no decision has been taken in the High Court on the controversy surrounding the wearing of hijab of girl students or any religious dress in schools and colleges of Karnataka. The court adjourned the hearing of the matter till Monday. Along with this, the court has made important remarks that students cannot insist on religious dress from schools and colleges. Chief Justice Ritu Raj Awasthi said that schools and colleges should be opened immediately and education is necessary. According to sources, the next hearing is to be held at 2.30 pm on Monday and any decision can come from the court.

During the hearing of the case, Sanjay Hegde, the counsel for the girl students who demanded wearing of hijab, said that there is nothing in the Karnataka Education Act regarding uniform. "There is no specific provision in the Karnataka Education Act regarding uniforms," ​​he told the court. He also said that hijab is part of Islam and is not being allowed by schools and colleges. He said that a decision in this regard needs to be taken soon so that the studies of the students are not affected as their examinations are also going to be held in March itself.

Government said, permission cannot be given for entry in hijab and saffron Gamcha

The Attorney General, appearing for the government, said that the dress code should be followed in schools or colleges. Earlier on Wednesday, the court of Justice Krishna Dixit had referred the matter before a larger bench. Chief Justice Ritu Raj Awasthi, Justice Krishna Dixit and JM Khaji were present in the hearing today. The Attorney General said that the students cannot be allowed to enter with scarves or hijab or saffron gamcha. This would not be a good situation. Students will have to come to the schools with the uniform code.

Exams are to be held in one and a half months, find solutions quickly.

The lawyer appearing for the girls said that we do not want that there should be any kind of separatism in schools and colleges. He said that now only one and a half months are left for the examination. Therefore, it is necessary to resolve this dispute. Chief Justice Ritu Raj Awasthi said that we believe that nothing has been said clearly about school uniform in the Education Act. While hearing the matter, the High Court said that we are considering whether wearing hijab comes within the purview of a fundamental right or not. Apart from this, we are also considering whether wearing hijab is a necessary part of following religion or not. The court, while hearing the hijab controversy, also directed the media not to report every single comment. The court said that the media should wait for the final order.