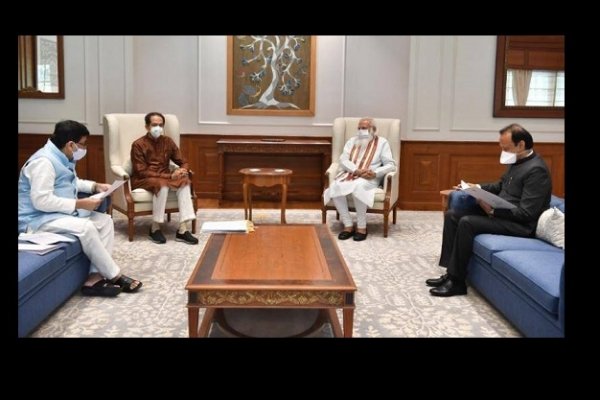 He informed that Modi was requested to take a decision while you have the power and give justice to the Maratha community. Ashok Chavan has said that whether it is Maratha or OBC reservation, there should be an amendment or legal way to take a positive role.

"Maharashtra is yet to get 24,306 crore GSAT compensation. The crisis of Corona is on everyone and if this money is received soon for financial relief, it will be beneficial, ”said Aji Pawar. Modi was also told about the need to change the criteria for help after the storm hit. Ajit Pawar informed that Uddhav Thackeray had said that he needed to change the rules of 2015. Ajit Pawar also demanded immediate release of Rs 1,044 crore from the 14th Finance Commission.

Governor's complaint to Modi
Chief Minister Uddhav Thackeray also raised the issue of 12 Governor-appointed seats in the Legislative Council before Modi. "The government is in the majority. The cabinet passed a resolution and met with the governor. These 12 seats have been vacant for almost eight months. . The rules cover all the conditions that a person has to choose. So we also raised that issue with Modi. He has said that he will take a decision on what needs to be done, ”said Ajit Pawar. "The discussion was satisfactory and the Prime Minister gave us 90 minutes," he said.

Uddhav Thackeray's reaction to free vaccination
"Citizens of the country should be vaccinated as soon as possible. The central government had handed over the responsibility to the states and we were also preparing for it. I too had often said that there are six crore people in Maharashtra in the age group of 18 to 44 years and it would take 12 crore doses. We had set aside funds for that. We had even started. But the supply was not going well. The Prime Minister has taken all the responsibility and we thank him. Expect no obstacles now, ”said Uddhav Thackeray. "Everyone has the right to a free vaccine," he said.