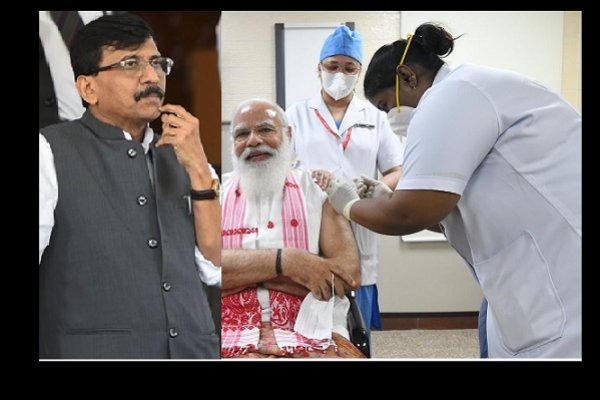 The third phase of corona vaccination in the country has started from today and it has started from Prime Minister Narendra Modi. Narendra Modi vaccinated Bharat Biotech at AIIMS Hospital this morning. Modi shared the photo on Twitter and appealed to the eligible citizens to make the country tax-free. Meanwhile, Shiv Sena MP Sanjay Raut, while talking to reporters, praised the vaccine.

Corona vaccine taken by Narendra Modi; Appealing to the countrymen, he said

"The prime minister has taken the corona vaccine. The President will take over, the Union Minister will also take over. All people should get vaccinated. The Prime Minister's vaccination will also boost the confidence of the people. Therefore, we welcome Modi for coming out in front of everyone and showing faith in him. This is important. When Biden was vaccinated in the United States, people there believed that the vaccine would protect them. It is commendable that the Prime Minister has vaccinated our country today, ”said Sanjay Raut.

… So Modi took the vaccine at seven in the morning; Learn the 'election connection' of this vaccination

Even though Modi has been vaccinated, there is talk of an election connection behind it. Modi wore a carpet around his neck, which is considered the identity and symbol of the Assamese people. This rug was presented to him by some Assamese women. One of the nurses seen in the photo with Modi is from Puducherry and the other is from Kerala.

When asked about this, Sanjay Raut said, "Look at it as national unity. I will say that it is not only the power of the Congress. Modi is on the path of Congress. Earlier, Congress leaders were playing a similar role. Taking care that state leaders from all over the country will be around us. Elections are a worm in your head. They may not even have it in their head. He is a very good leader. "

"It would be better for Maharashtra and the people if the opposition had some discussions during the convention rather than surrounding the government," he said. Leading leaders in the BJP are very fond of discussions. They have this opportunity and should discuss it. The Chief Minister, Deputy Chief Minister, other leaders will answer. Therefore, they should not waste this opportunity, ”advised Sanjay Raut.

After the resignation of Sanjay Rathore, the opposition is demanding to file a case. Speaking on the issue, he said, "Opposition does not have to listen to everything. Opponents are making demands. The government will decide on the demands which have legal facts. We also go to the center and make many demands, are they accepted? We demand reduction in petrol and diesel prices. But does anyone listen? The central government is saying let's talk, let's listen. Similarly, the Chief Minister has said that he will not release the culprits in this case and the seriousness of the matter should be understood.