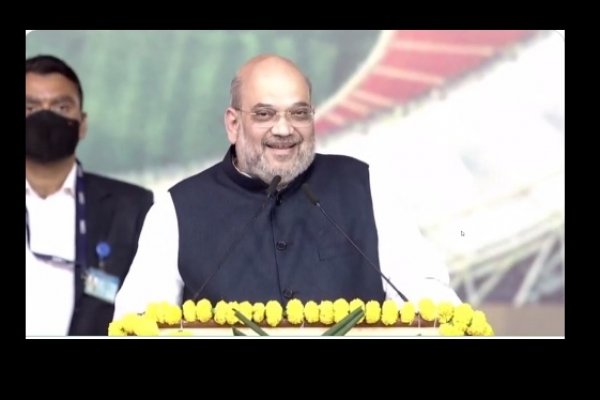 The largest cricket stadium in the world, Narendra Modi Stadium is the largest cricket stadium in the world. Located in Sabarmati, Ahmedabad, this stadium is equipped with modern sports facilities and here 1.32 lakh people can watch matches together. This stadium is spread over an area of ​​63 acres, which has a seating capacity of one lakh ten thousand spectators simultaneously. The stadium has 76 corporate boxes, Olympic-level swimming pools, indoor academies, four dressing rooms for athletes and food courts. Will be known from sport city of india

Addressing the program after the inauguration of the Ahmedabad Narendra Modi Stadium, Amit Shah said, 'Today is the golden day of India's sports world. Today, the land of a big sports enclave has been done by linking the name of Iron Man Bharat Ratna Sardar Patel to the President of India. He further added, 'By combining the sports complex, enclave and stadium of Ahmedabad, India will be ready to host the Olympics in just six months. The size of the infrastructure we have built has been like this. Ahmedabad will now be known as Sport City of India. At the same time, Amit Shah said that 1.32 lakh viewers can watch the match, 'All sports of the world will be arranged here in Sports Enclave.

Training and lodging arrangements for all the players of all sports of the country and the world will be here. Arrangement for 3 thousand children to play and live together will be here. He said, 'This stadium has a capacity of 1.32 lakhs, making it not only the world's largest cricket stadium, but also the world's largest sports stadium. It can host 2 different games in a single day.

The Home Minister said, "Together with the Sardar Patel Sports Enclave, the Narendra Modi Stadium and the sports complex at Narayanpura, these three will be fully arranged to play all the games in any international event at the same level in the same city. . ' He said, 'Sardar Patel Sports Enclave is a very ambitious project, the foundation of which has been laid today. To take Indian sports to the top globally, we have to provide them with that level of infrastructure. ' Another stadium to be named after Major Dhyanchand, Amit Shah said, 'Sardar Patel Sports Enclave has also been worshiped today. Our country needs that the youth of our country appear in international competitions and win medals.
Modi ji has made a huge gift to the region by making this sports enclave.

He further said, 'An athletic stadium for football and track-and-field games will be built with a seating capacity of 50,000 people. Two indoor stadiums of 12 thousand and 15 thousand capacity will also be built. With this, another hockey stadium will be built in the name of hockey magician Dhyan Chand. Sports is also a major part of self-reliant India. The Home Minister said, 'I have been working with PM Narendra Modi since the year 1980. He has always said that Indian youth need to increase sports to contribute to the nation. Thus he started Khelo India and Fit India. He further said, 'Sports are also a major part of PM Modi's call for self-reliant India. We assure you that we will provide the right infrastructure and platform to our youth.