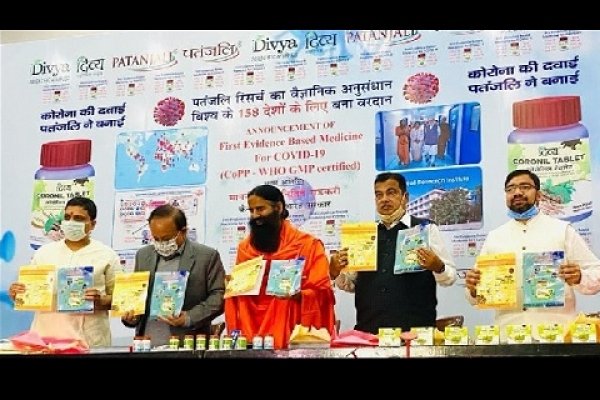 Delhi : Coronil, a drug developed by Patanjali Ayurveda in Haridwar, has been certified by the AYUSH Department under the auspices of the World Health Organization Scheme said Ramdev .

The company claims that coronil is the first drug to be proven on corona. Coronil was developed by the Patanjali Research Institute and has been active on the drug since January 2020.

Swami Ramdev said Coronil would work on cardiovascular programs. Naturopathy is used in it and is an inexpensive medicine for everyone. The AYUSH Department has provided information on drug and coronil pills that prevent covid infection 19.

In this regard, Union Transport Minister Nitin Gadkari thanked Father Ramdev and Acharya Balakrishna, saying that the Patanjali study would definitely benefit the country. Gadkari said they have returned to the people scientifically, which will boost people's confidence in medicine.

Union Health Minister Harsh Vardhan praised Ayurvedic treatment. The faith of the people in Ayurveda increased greatly during the Corona era. The Ayurveda market used to grow at an average rate of 15 percent per year before the Corona organization, but this time it has grown by 50 to 90 percent, said Harsh Vardhan.

Coronil was introduced at an event attended by Union Health Minister Harsh Vardhan and Transport Minister Nitin Gadkari. In the center of the coronilla

Known as a drug product AYUSH branch of the Drug Certification Control Association. Coronil is now shipped to 158 countries.

There are no greetings without miracles. This Ramdev Baba tree will definitely help the world. It takes time to do further research. - Nitin Gadkari, Minister of Transport