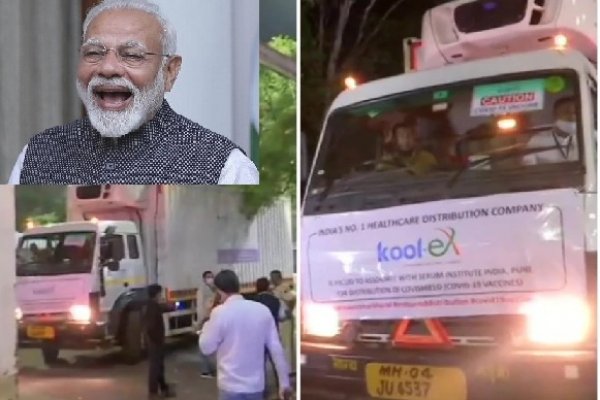 New Delhi: Vaccination will start from January 16 in the country. The government has ordered more than six crore vaccine doses to Serum Institute and Bharat Biotech. The total value of the order is around Rs 1,300 crore.

The government has ordered 55 lakh doses of vaccines from Bharat Biotech. The cost is around Rs 162 crore. An order was placed on Monday for the purchase of 1.1 crore doses of Serum Institute's Covishield vaccine. A single dose of vaccine, including GST, will cost around Rs 210. The central government aims to procure 4.5 crore doses by April. The cost of a dose of 1.1 crore vaccines is around Rs 231 crore. The cost of the remaining 4.5 crore vaccines will be Rs 1,176 crore at current prices. Meanwhile, the first batch of vaccine trucks have left for Gujarat from the Serum Institute in Pune. Also, doses of corona vaccine will be delivered to 13 different locations today, ANI reported.

Meanwhile, the first batch of Covishield vaccine has been dispatched from the Serum Institute in Pune. Police provided security to the vehicle from the Serum Institute to the airport. Earlier, the vehicle carrying the vaccine was worshiped by the police. The vaccine will be shipped across the country from Pune airport by cargo planes. Today, three more such vehicles will leave for Pune Airport with doses of vaccine. The serum institute has started sending the vaccine from today after the central government yesterday ordered the serum institute to supply one crore and one million doses of the covshield vaccine.

He further said that Prime Minister Modi will be connected to 287 centers in Gujarat on January 16 through video conferencing. In the meantime, he will interact with doctors and vaccinators at two locations in Ahmedabad and Rajkot.

56.5 lakh doses of the vaccine will be delivered to different cities

Union Aviation Minister Hardeep Singh Puri informed about this. In the first phase of vaccination, Kovid warriors will be vaccinated. For this, distribution of vaccine has started across the country. The vaccine will be delivered across the country from the Serum Institute. Today (January 12), 56.5 lakh doses of the vaccine will be delivered to different cities from nine aircrafts of Air India, SpiceJet and Indigo. The flights will be operated from Pune and the vaccines will be delivered to Delhi, Chennai, Kolkata, Guwahati, Shillong, Ahmedabad, Hyderabad, Vijayawada, Bhubaneswar, Patna, Bangalore, Lucknow and Chandigarh.

The cost will be borne by the central government

Meanwhile, Prime Minister Narendra Modi on Monday announced that the central government would bear the cost of vaccinating three crore people, health workers and front line workers in the first phase of the corona vaccination campaign. He also clarified that the people's representatives will not be involved in this phase.

The nationwide vaccination campaign will start from January 16, 2021. Before the start of vaccination, Prime Minister Modi interacted with the Chief Ministers of all the states. Vaccination of Covid-19 has been underway in nearly 50 countries over the past three to four weeks, he said. So far, only 2.5 crore people have been vaccinated. India's goal is to vaccinate 300 million people in the next few months.